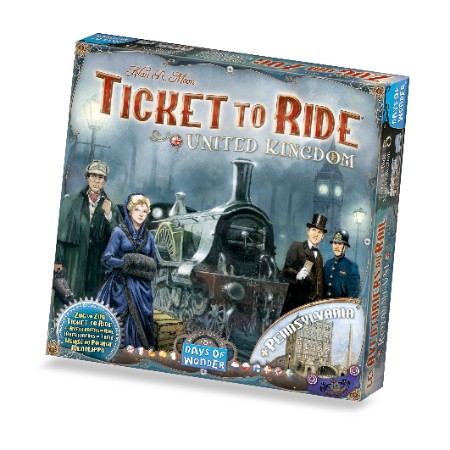 Gratis verzending vanaf € 50,-
Achteraf betalen
Klanten beoordeling 9.4/10
Productinformatie "Ticket to Ride - United Kingdom (+ Pennsylvania)"
With the United Kingdom Map designed for 2 to 4 players, players will need to develop their technologies to be able to extend their network over the United Kingdom of Great Britain and Ireland during the 19th century. The double-sided map also features the board of Pennsylvania, a state full of railroad history where 2 to 5 players will invest in railroad companies to achieve victory. The United Kingdom map comes with a complete new Train cards deck including additional Locomotives, and Technology cards such as the Mechanical Stoker or theThermocompressor that will allow players to develop their Technology level and build faster trains and claim long routes. The Pennsylvania map comes with 60 “Stock Shares” cards representing the great railroad companies of Pennsylvania. On this map, claiming a route also allows a player to invest in a company – having a majority of shares in a given company allows to score extra bonus points at game end