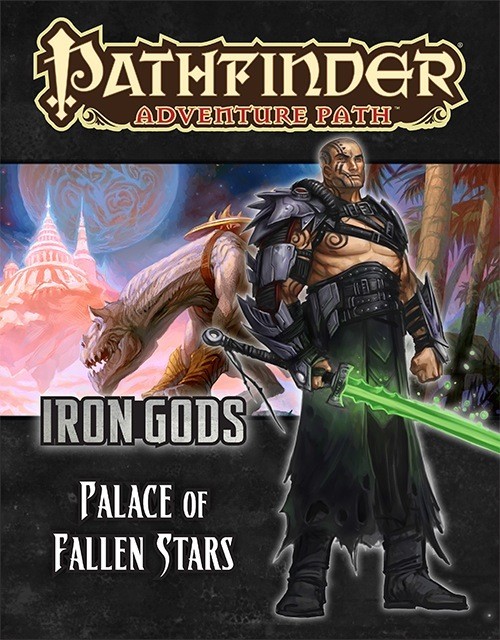 Numeria’s capital city of Starfall sprawls in the shadow of the region’s most infamous ruin, Silver Mount. Here, the nation’s sadistic Technic League and the Black Sovereign rule the land and control access to incredible and dangerous technological wonders, including the mysterious Silver Mount itself. Somewhere deep within that ruined starship, the greatest of the Iron Gods is rising to power. Yet, before the heroes of Numeria can oppose it, they must first defeat the Technic League and the Black Sovereign in turn, for they control access to the legendary site. Will the clues harvested from an ancient android oracle and the technological wonders gathered from strange ruins across Numeria be enough for the heroes to prevail? Or will they simply become the latest upstarts to be crushed under the Technic League’s metal boot? “Palace of Fallen Stars” is a Pathfinder Roleplaying Game adventure for 13th-level characters. The adventure continues the Iron Gods Adventure Path, an exploration of the lands of Numeria, where savage barbarism clashes with the wonders and horrors of superscience. Several new monsters, a gazetteer of the city of Starfall, an article about Zyphus (god of graveyards), and Amber E. Scott’s Pathfinder Journal round out this volume of the Pathfinder Adventure Path!