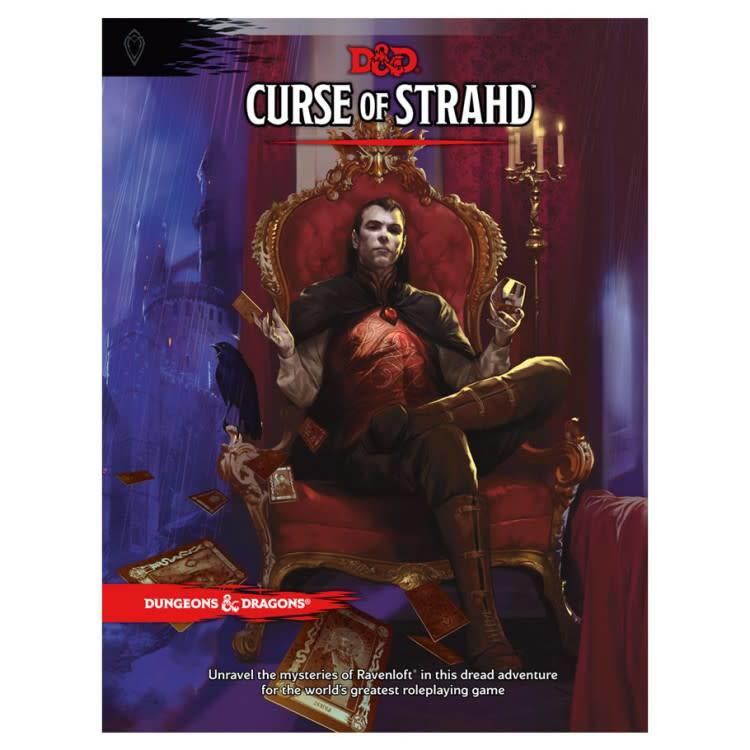 Wizards of the Coast
Uitverkocht

Niet meer beschikbaar
Dit product is "tijdelijk" niet meer leverbaar
Productinformatie "Dungeons & Dragons: Curse of Strahd"
Under raging storm clouds, the vampire Count Strahd von Zarovich stands silhouetted against the ancient walls of Castle Raveanloft. Far below, yet not beyond his keen eyesight, a party of adventurers has just entered his domain. Strahd’s face forms the barest hint of a smile as his dark plan unfolds. He knew they were coming, all according to his plan. A lightning flash rips through the darkness, but Strahd is gone. The master of Castle Ravenloft is having guests for dinner and you are invited. 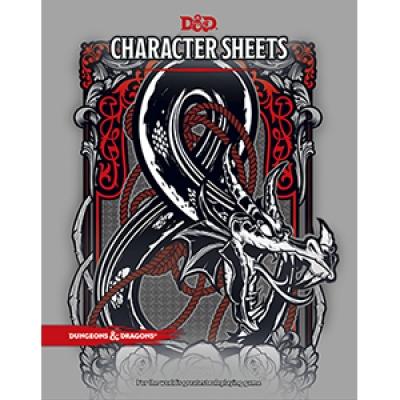 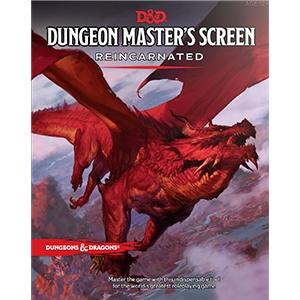 Levering op:
Dungeons & Dragons - Dungeon Master's Screen Reincarnated
Master the game with this indispensable tool for the world’s greatest roleplaying game. Lost is the poor soul borne aloft in the grip of the ancient red dragon featured in a spectacular panoramic vision by Tyler Jacobson on this durable, four-panel Dungeon Master’s Screen. The interior rules content on this new screen has been revisited and refreshed as a direct result of feedback received from D&D fans everywhere. The screen’s landscape orientation allows the Dungeon Master to easily see beyond the screen and reach over, even as it keeps die rolls and notes hidden from players. Provides an at-a-glance reference for the most relevant and often used in-game information, equipping Dungeon Masters of all skill levels with essential support. An excellent resource for new and existing Dungeons Masters to facilitate inspired adventures and an engaging play experience.
€ 14,95
Op voorraad 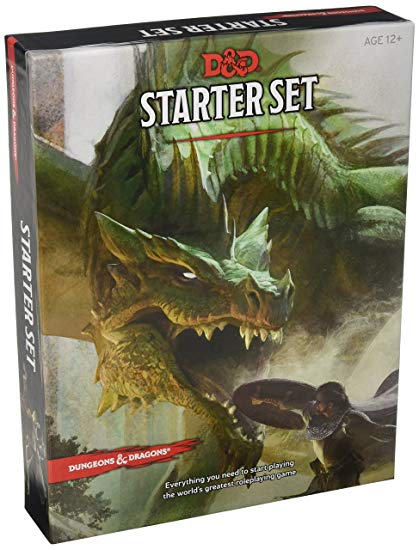 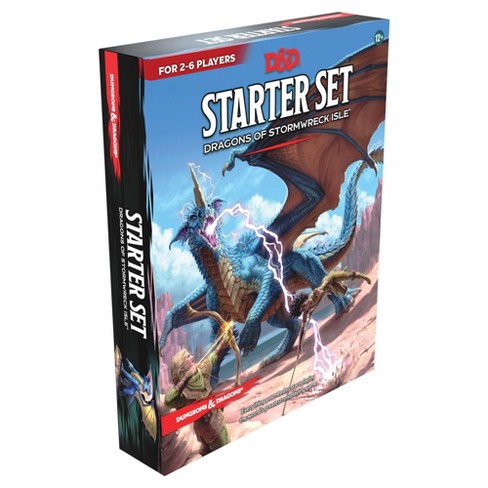 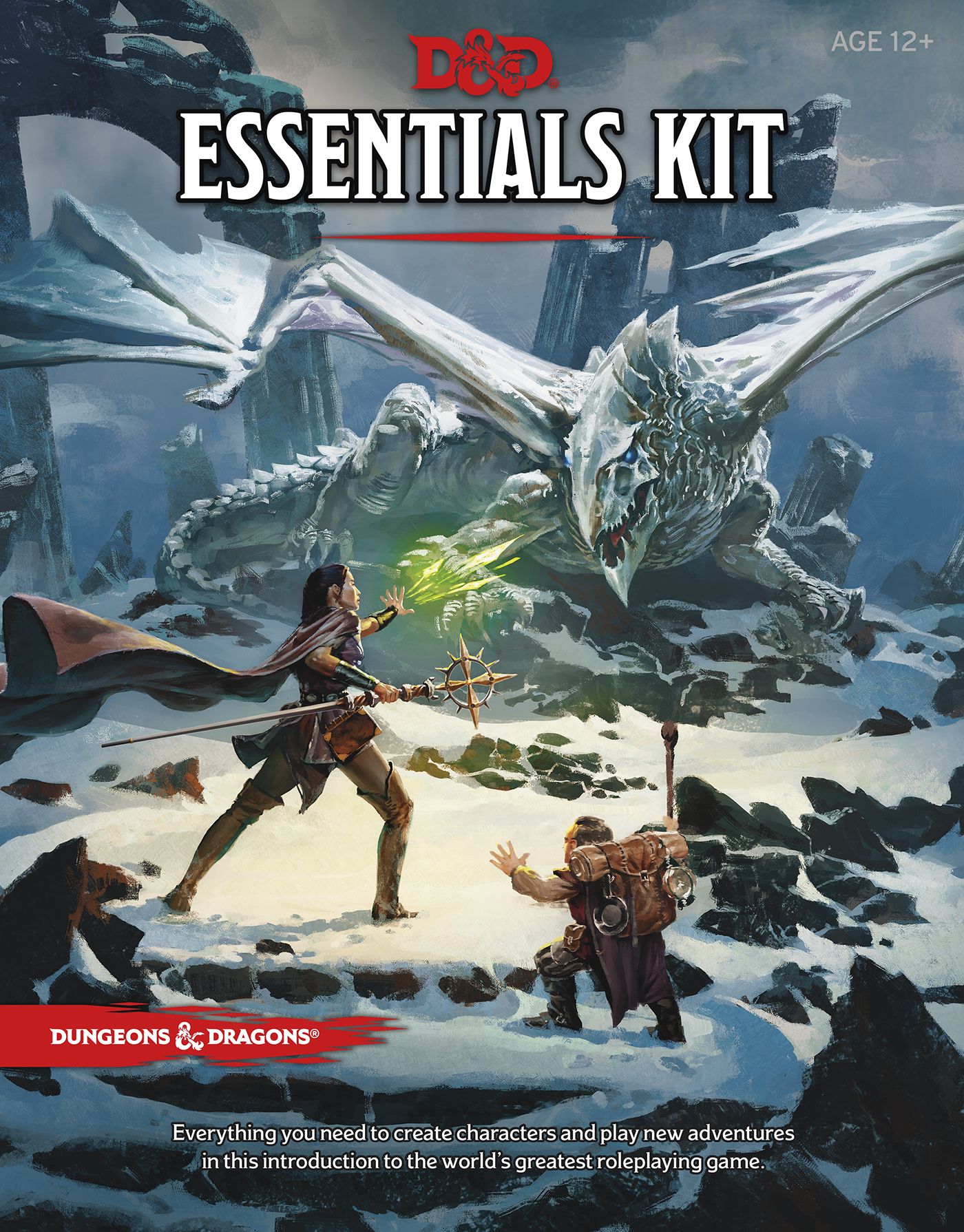 Levering op:
Dungeons & Dragons: Essentials Kit
Everything you need to create characters and play the new adventures in this introduction to the world’s greatest roleplaying game. Dungeons & Dragons is a cooperative storytelling game that harnesses your imagination and invites you to explore a fantastic world of adventure, where heroes battle monsters, find treasures, and overcome quests. The D&D Essentials Kit is a new introductory product meant to bring D&D to audiences interested in jumping into a fantasy story. This box contains the essentials you need to run a D&D game with one Dungeon Master and one to five adventurers. A newly designed rulebook on-boards players by teaching them how to make characters, and the included adventure, Dragon of Icespire Peak, introduces a new 1-on-1 rules variant.
€ 24,95
Op voorraad 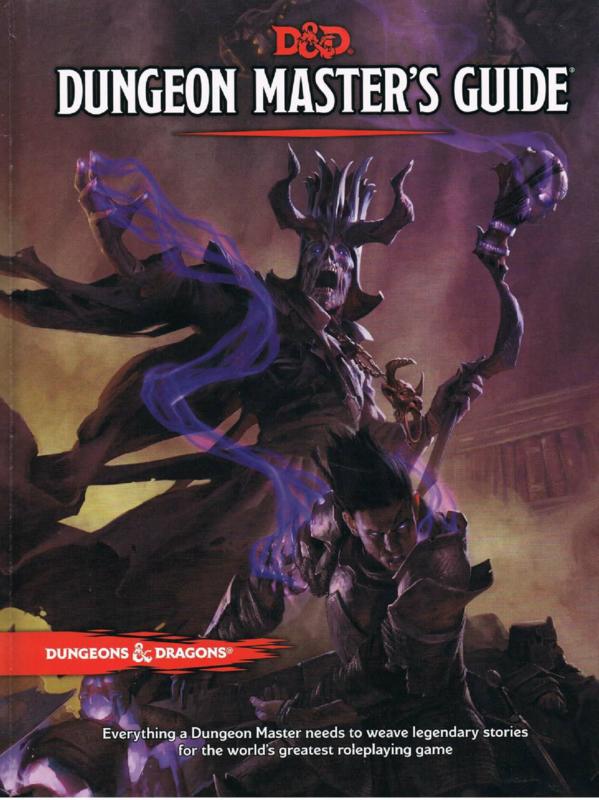 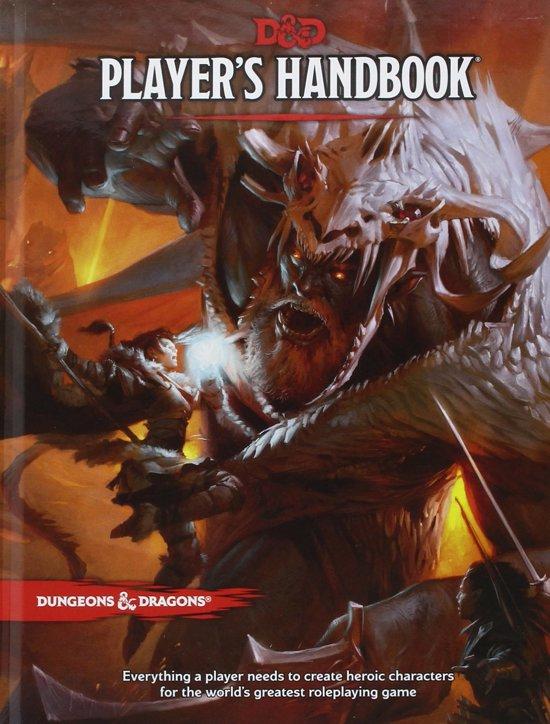 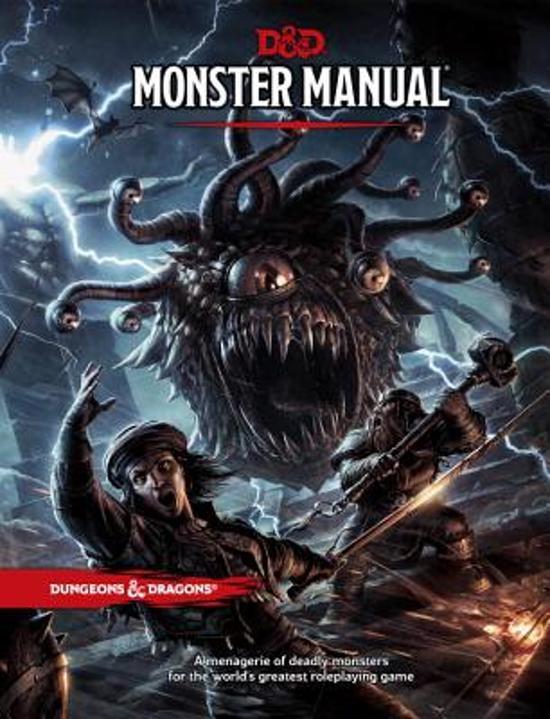 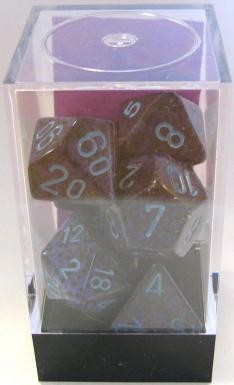 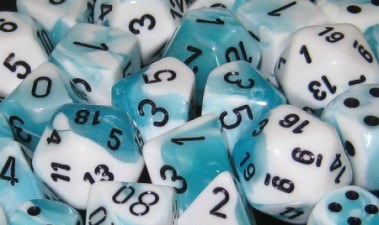 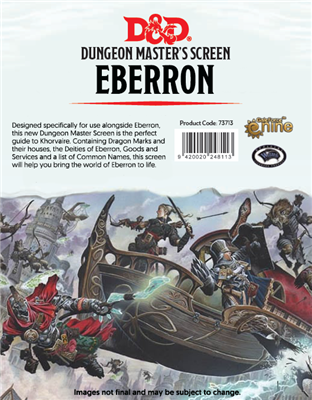 Levering op:
Dungeons & Dragons DM Screen Eberron
Designed specifically for use alongside Eberron, this new Dungeon Master Screen is the perfect guide to Khorvaire. Containing Dragon Marks and their houses, the Deities of Eberron, Goods and Services, and a list of Common Names, this screen will help you bring the world of Eberron to life.
€ 15,95
Uitverkocht 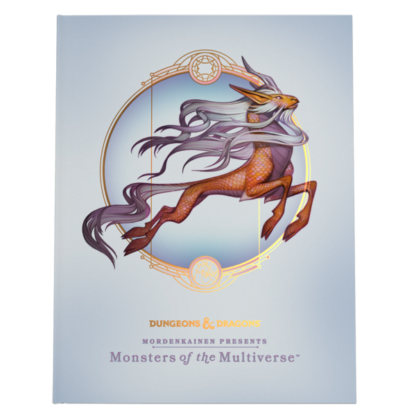 Niet meer beschikbaar
Dungeons & Dragons: Mordenkainen Presents: Monsters of the Multiverse (Alt Cover White)
Sparkling with the musings of the wizard Mordenkainen, this tome features a host of creatures for use in the Dungeons & Dragons roleplaying game. Compiling and updating monsters that originally appeared in previous D&D fifth edition releases, these creatures represent some of the most benevolent and malevolent forces that D&D heroes might face. The book also gathers together fantastical peoples from many different worlds. Each of these peoples represents a race option when you create your D&D character, expanding on the choices in the Player’s Handbook. • Includes more than 250 monsters—updates to the monsters include making spellcasters easier for Dungeon Masters to run, giving many monsters more damage and resilience, and improving the organization of the stat blocks themselves • Includes more than 30 playable races—brings the game’s setting-agnostic races into one book, complementing the races in the Player’s Handbook • A multiverse of lore—includes updates to monster lore that refocuses their stories on the D&D multiverse, rather than on any particular world
€ 67,95
Details
Op voorraad 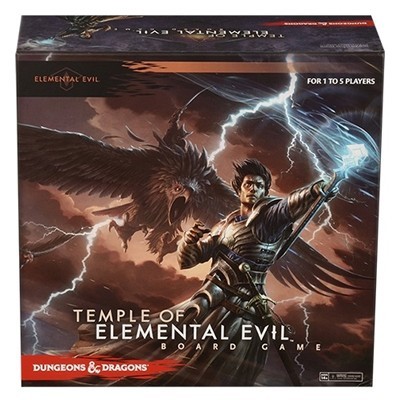 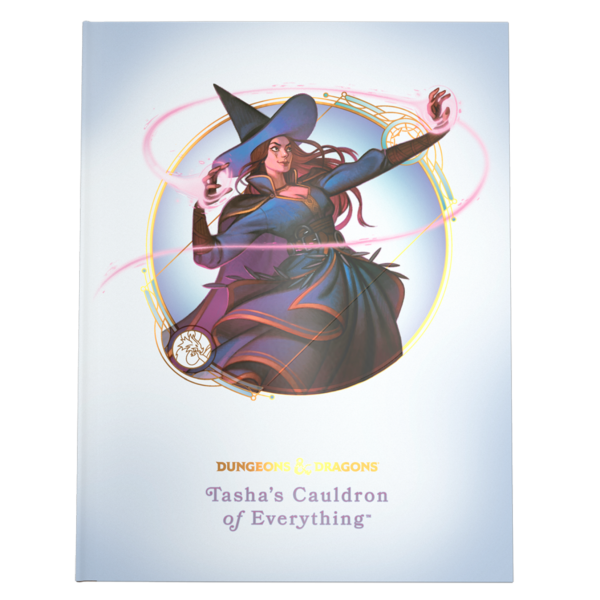 Niet meer beschikbaar
Dungeons & Dragons: Tasha's Cauldron of Everything (Alt Cover White)
A magical mixture of rules options for the world's greatest roleplaying game. The wizard Tasha, whose great works include the spell Tasha’s hideous laughter, has gathered bits and bobs of precious lore during her illustrious career as an adventurer. Her enemies wouldn’t want these treasured secrets scattered across the multiverse, so in defiance, she has collected and codified these tidbits for the enrichment of all. EXPANDED SUBCLASSES. Try out subclass options for every Dungeons & Dragons class, including the artificer, which appears in the book.  MORE CHARACTER OPTIONS. Delve into a collection of new class features and new feats, and customize your character’s origin using straightforward rules for modifying a character’s racial traits.  INTRODUCING GROUP PATRONS. Whether you're part of the same criminal syndicate or working for an ancient dragon, each group patron option comes with its own perks and types of assignments.  SPELLS, ARTIFACTS & MAGIC TATTOOS. Discover more spells, as well as magic tattoos, artifacts, and other magic items for your campaign.  EXPANDED RULES OPTIONS. Try out rules for sidekicks, supernatural environments, natural hazards, and parleying with monsters, and gain guidance on running a session zero.  A PLETHORA OF PUZZLES. Ready to be dropped into any D&D adventure, puzzles of varied difficulty await your adventurers, complete with traps and guidance on using the puzzles in a campaign. Full of expanded content for players and Dungeon Masters alike, this book is a great addition to the Player's Handbook and the Dungeon Master’s Guide. Baked in you'll find more rule options for all the character classes in the Player's Handbook, including more subclass options. Thrown in for good measure is the artificer class, a master of magical invention. And this witch's brew wouldn't be complete without a dash of added artifacts, spellbook options, spells for both player characters and monsters, magical tattoos, group patrons, and other tasty goodies.
€ 37,95  Prijs was: € 49,00  -
Details