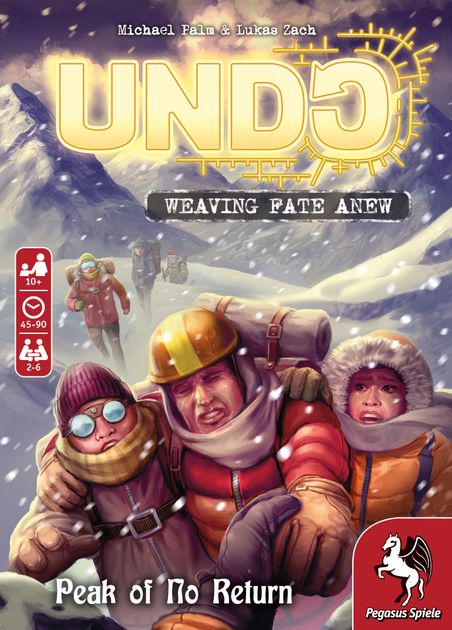 Undo: Peak of no return EN

Goa, India, May 1972: Nervously, a person skims over yesterday’s news article: “International expedition disaster in the Himalayas. All 7 members of a mountaineering group are believed to have died during a summit ascent in the Himalayan Mountains. Included were citizens from England and the USA. The disparate group had left …” The person gazes out the train’s window deep in thought. Was this finally the end of days of flight? At the station a colorfully dressed figure greets the individual: “Welcome to Palolem Beach! I’m Jamie.”“I’m Alex,” the person replies and smiles, because they’ve always liked that name.In UNDO – Peak of No Return, players learn the rules and encounter the starting situation of the case on the first few cards, which also guide them through the setup. Once the setup is complete, players carry out nine time jumps. Every jump takes them to one independent moment from the past and allows them to change that moment in one of three ways, which may change the starting situation for better or for worse. The players need to discuss what they know and try to come up with theories about the story, using the clues they gather from the different time jumps. Only by continuously adapting their theories and making the right choices will they successfully change fate and save the life of not one, but a whole group of people!

Undo: Blood in the Gutter